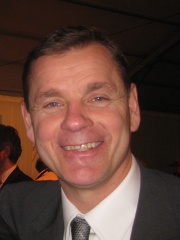 Håkan Per Loob (born 3 July 1960) is a Swedish former professional ice hockey player for Färjestad BK of the Elitserien and the Calgary Flames of the National Hockey League (NHL). He is the head of European Scouting for the Calgary Flames after resigning as president of Hockey Operations for Färjestad. Considered one of the greatest Swedish hockey players of all time, he was inducted into the International Ice Hockey Federation Hall of Fame in 1998 and the Swedish ice hockey Hall of Fame in 2012. Read more on Wikipedia

Since 2007, the English Wikipedia page of Håkan Loob has received more than 100,432 page views. His biography is available in 18 different languages on Wikipedia (up from 15 in 2019). Håkan Loob is the 48th most popular hockey player (down from 37th in 2019), the 850th most popular biography from Sweden and the 3rd most popular Swedish Hockey Player.

Among HOCKEY PLAYERS In Sweden