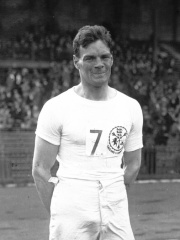 Guy Montagu Butler (25 August 1899 – 22 February 1981) was a British sprinter, winner of the gold medal in the 4 × 400 m relay at the 1920 Summer Olympics. With four Olympic medals Guy Butler shares the British record for the number of medals in athletics with Sebastian Coe and Mo Farah. Butler was born in Harrow, Middlesex, to Edward Montagu Butler and Gertrude Mary Fair. Read more on Wikipedia

Since 2007, the English Wikipedia page of Guy Butler has received more than 2,243 page views. His biography is available in 15 different languages on Wikipedia making him the 441st most popular athlete.

Among ATHLETES In United Kingdom