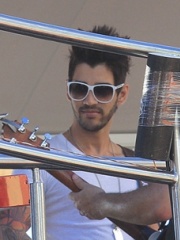 Nivaldo Batista Lima (born September 3, 1989), known by his stage name Gusttavo Lima, is a Brazilian singer, songwriter and record producer. He is known in Brazil for his many hit songs, and gained international prominence through the song "Balada".Lima started his career at the age of 7, with his elder brothers Willian and Marcelo, as a member of the Trio Remelexo. After leaving the trio, he went to the sertanejo duo Gustavo & Alessandro. Read more on Wikipedia

Among singers, Gusttavo Lima ranks 2,268 out of 3,541. Before him are Lee Hi, JoJo, Brandy Norwood, K.Will, Shiri Maimon, and Sıla. After him are Debby Boone, Kasia Kowalska, Jelena Tomašević, Mayra Andrade, Jennifer Paige, and Shin Won-ho.