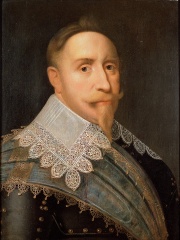 Gustavus Adolphus (9 December [N.S 19 December] 1594 – 6 November [N.S 16 November] 1632), also known in English as Gustav II Adolf or Gustav II Adolph, was King of Sweden from 1611 to 1632, and is credited for the rise of Sweden as a great European power (Swedish: Stormaktstiden). During his reign, Sweden became one of the primary military forces in Europe during the Thirty Years' War, helping to determine the political and religious balance of power in Europe. He was formally and posthumously given the name Gustavus Adolphus the Great (Swedish: Gustav Adolf den store; Latin: Gustavus Adolphus Magnus) by the Riksdag of the Estates in 1634.He is often regarded as one of the greatest military commanders in modern history, with use of an early form of combined arms. Read more on Wikipedia

Gustavus Adolphus was the King of Sweden from 1611 to 1632. He is most famous for being a military genius and a tactical innovator. He is also credited with creating the first modern army.

Page views of Gustavus Adolphus of Swedens by language

Among politicians, Gustavus Adolphus of Sweden ranks 155 out of 15,577. Before him are Oliver Cromwell, Simón Bolívar, Cardinal Richelieu, Lech Wałęsa, Maximilien Robespierre, and Paul von Hindenburg. After him are Alfred the Great, Louis IX of France, Charles VI, Holy Roman Emperor, Ivar the Boneless, Darius III, and Mehmed I.