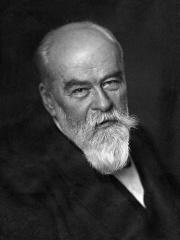 Gustav Friedrich (after 1908: von) Schmoller (German: [ˈʃmɔlɐ] (listen); 24 June 1838 – 27 June 1917) was the leader of the "younger" German historical school of economics. He was a leading Sozialpolitiker (more derisively, Kathedersozialist, "Socialist of the Chair"), and a founder and long-time chairman of the Verein für Sozialpolitik, the German Economic Association, which continues to exist.The appellation "Kathedersozialist" was given to Schmoller and other members of the Verein by their enemies. Schmoller disavowed the "socialist" label, instead tracing his thought to the heterodox liberalism represented by Jérôme-Adolphe Blanqui, Jean Charles Léonard de Sismondi, John Stuart Mill, Johann Heinrich von Thünen, Bruno Hildebrand, Thomas Edward Cliffe Leslie, Lorenz von Stein, and Émile de Laveleye and radicals such as Frederic Harrison and Edward Spencer Beesly. Read more on Wikipedia

Since 2007, the English Wikipedia page of Gustav von Schmoller has received more than 61,768 page views. His biography is available in 18 different languages on Wikipedia making him the 146th most popular economist.

Among ECONOMISTS In Germany