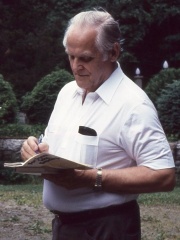 Gus Hall (born Arvo Kustaa Halberg; October 8, 1910 – October 13, 2000) was a leader and chairman of the Communist Party USA (CPUSA) and its four-time U.S. presidential candidate. As a labor leader, Hall was closely associated with the so-called "Little Steel" Strike of 1937, an effort to unionize the nation's smaller, regional steel manufacturers. During the Second Red Scare, Hall was indicted under the Smith Act and was sentenced to eight years in prison. Read more on Wikipedia

Among politicians, Gus Hall ranks 11,135 out of 15,710. Before him are Wolfgang Larrazábal, Rafael Paasio, Aurel Popovici, Rafael Erich, Hermann, Prince of Hohenlohe-Langenburg, and Ruben III, Prince of Armenia. After him are Ariarathes III of Cappadocia, Kjell Eugenio Laugerud García, Ali Al-Naimi, Titus Didius, Georg I, Duke of Saxe-Meiningen, and Islam Shah Suri.