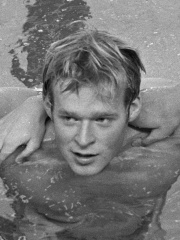 Karl Gunnar Larsson (born 12 May 1951) is a former swimmer from Sweden. He won the 400 metre individual medley event at the 1972 Summer Olympics by two one-thousandths (0.002) of a second over American Tim McKee, breaking the Olympic record. Read more on Wikipedia

Since 2007, the English Wikipedia page of Gunnar Larsson has received more than 2,961 page views. His biography is available in 17 different languages on Wikipedia making him the 59th most popular swimmer.