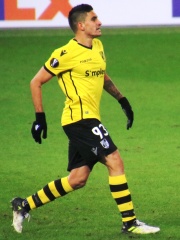 This name uses Spanish naming customs: the first or paternal family name is Celis and the second or maternal family name is Montiel.Guillermo León Celis Montiel (born 8 May 1993) is a Colombian professional footballer who plays as a midfielder for Categoria Primera A club Deportes Tolima. Read more on Wikipedia

Since 2007, the English Wikipedia page of Guillermo Celis has received more than 72,408 page views. His biography is available in 15 different languages on Wikipedia making him the 11,898th most popular soccer player.