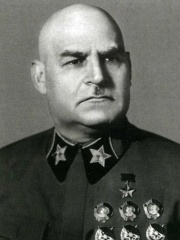 Grigory Ivanovich Kulik (Russian: Григо́рий Ива́нович Кули́к; 9 November 1890 – 24 August 1950) was a Soviet military commander and Marshal of the Soviet Union, and chief of the Red Army's Main Artillery Directorate until June 1941. An incompetent commander, his knowledge of military technology was frozen in 1918, and he dismissed innovations such as tanks, anti-tank guns, and the Katyusha rocket launcher; only his personal friendship with Stalin from service together in the Russian Civil War protected him from criticism. Read more on Wikipedia

Since 2007, the English Wikipedia page of Grigory Kulik has received more than 106,228 page views. Her biography is available in 27 different languages on Wikipedia making her the 541st most popular military personnel.