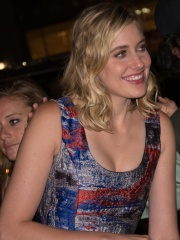 Greta Celeste Gerwig (; born August 4, 1983) is an American actress and filmmaker. She first garnered attention after working on and appearing in several mumblecore films. Between 2006 and 2009, she appeared in a number of films by Joe Swanberg, some of which she co-wrote or co-directed, including Hannah Takes the Stairs (2007) and Nights and Weekends (2008).Since the early 2010s, Gerwig has collaborated with her partner Noah Baumbach on several films, including Greenberg (2010), Frances Ha (2012), for which she received a Golden Globe Award nomination, and Mistress America (2015). Read more on Wikipedia

Among actors, Greta Gerwig ranks 4,981 out of 10,030. Before her are Tess Harper, A Martinez, Danny Nucci, Verna Felton, Angus Macfadyen, and Slim Pickens. After her are Max Riemelt, Janusz Zakrzeński, Sterling K. Brown, Tom Arnold, Kate Burton, and Elizabeth Ashley.