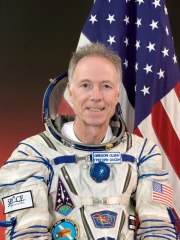 Gregory Hammond Olsen (born April 20, 1945) is an American entrepreneur, engineer and scientist who, in October 2005, became the third private citizen to make a self-funded trip to the International Space Station with the company Space Adventures. Olsen was the co-founder and chairman of Sensors Unlimited Inc., a company developing optoelectronic devices such as sensitive near-infrared (NIR) and shortwave-infrared (SWIR) cameras. One of Sensors Unlimited's major customers is NASA. Currently, Olsen is President of GHO Ventures, LLC, in Princeton, New Jersey, where he manages his angel investments, South African winery, Montana ranch, and performs numerous speaking engagements to encourage children – especially minority and female children – to consider careers in science or engineering. Read more on Wikipedia

Since 2007, the English Wikipedia page of Gregory Olsen has received more than 95,420 page views. His biography is available in 23 different languages on Wikipedia making him the 280th most popular businessperson.