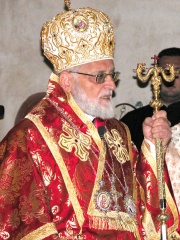 Gregory III Laham, B.S. (Arabic: غريغوريوس الثالث لحام; Latin: Gregorius III Lahamus; born Lutfy Laham, December 15, 1933, in Darayya, Syria), Emeritus Patriarch of Antioch and All the East, of Alexandria and Jerusalem, is the former spiritual leader of the Melkite Greek Catholic Church. He was elected on November 29, 2000, succeeding Patriarch Maximos V Hakim. He retired on May 6, 2017.He took the name Gregory in honor of Patriarch Gregory II Youssef, who was the last member of his religious order, the Basilian Salvatorian Order, to be elected Patriarch. Read more on Wikipedia

Among religious figures, Gregory III Laham ranks 1,215 out of 2,238. Before him are Hegesippus, Severus of Antioch, Joseph Freinademetz, Saint Homobonus, Carlo Maria Martini, and Archippus. After him are Adalard of Corbie, Impenitent thief, Maximianus of Ravenna, Angelo Amato, Victor Maurus, and Hugh of Châteauneuf.