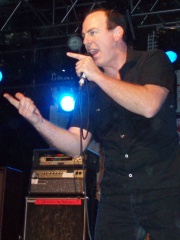 Gregory Walter Graffin (born November 6, 1964) is an American singer, songwriter, and evolutionary biologist. He is most recognized as the lead vocalist, songwriter, and only constant member of punk rock band Bad Religion, which he co-founded in 1979. He embarked on a solo career in 1997, when he released the album American Lesion. Read more on Wikipedia

Among singers, Greg Graffin ranks 1,643 out of 3,541. Before him are Tony Cetinski, Tajči, Nelly, Taeyang, Mika Nakashima, and Sergey Lazarev. After him are Lawrence Tibbett, Anne-Marie, Bruce Hornsby, Liv Kristine, Aida Garifullina, and Jeremy Camp.