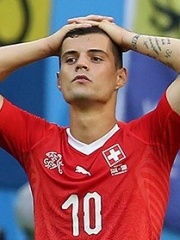 Granit Xhaka (Albanian pronunciation: [ɡɾaˈnit ˈdʒaka]; born 27 September 1992) is a Swiss professional footballer who plays as a midfielder for Premier League club Arsenal and captains the Switzerland national team. Xhaka began his career at hometown club Basel, winning the Swiss Super League in each of his first two seasons. He then moved to Bundesliga team Borussia Mönchengladbach in 2012, developing a reputation as a technically gifted player and natural leader alongside criticism for his temperament. Read more on Wikipedia

Since 2007, the English Wikipedia page of Granit Xhaka has received more than 3,578,484 page views. His biography is available in 47 different languages on Wikipedia making him the 2,524th most popular soccer player.