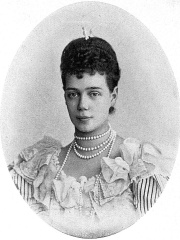 Grand Duchess Xenia Alexandrovna of Russia (Russian: Ксения Александровна Романова; 6 April [O.S. 25 March] 1875 – 20 April 1960) was the elder daughter and fourth child of Tsar Alexander III of Russia and Empress Maria Feodorovna of Russia (née Princess Dagmar of Denmark) and the sister of Emperor Nicholas II. She married her father's cousin, Grand Duke Alexander Mikhailovich of Russia, with whom she had seven children. She was the mother-in-law of Felix Yusupov and a cousin of Grand Duke Dmitri Pavlovich of Russia who, together, killed Grigori Rasputin, holy healer to her nephew, the haemophiliac Tsarevich Alexei Nikolaevich of Russia. During her brother's reign she recorded in her diary and letters increasing concern about his rule. Read more on Wikipedia

Xenia Alexandrovna, grand duchess of Russia, was most famous for her philanthropic work. She was the daughter of Tsar Alexander II and sister of Tsar Nicholas II.

Among politicians, Grand Duchess Xenia Alexandrovna of Russia ranks 2,887 out of 15,577. Before her are Emperor Qinzong, Francis III, Duke of Brittany, Perdiccas III of Macedon, Otto III, Duke of Bavaria, Zechariah of Israel, and François Vatel. After her are Cao Zhi, Carin Göring, Carl Friedrich Goerdeler, Francisco I. Madero, Ferhat Abbas, and Bolesław Bierut.