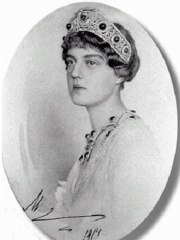 Grand Duchess Maria Pavlovna of Russia (Russian: Великая Княгиня Мария Павловна; 18 April [O.S. 6 April] 1890 – 13 December 1958), known as Maria Pavlovna the Younger, was a granddaughter of Alexander II of Russia. She was a paternal first cousin of Nicholas II (Russia's last Tsar) and maternal first cousin of Prince Philip, Duke of Edinburgh (consort of Elizabeth II). Her early life was marked by the death of her mother and her father's banishment from Russia when he remarried a commoner in 1902. Read more on Wikipedia

Among noblemen, Grand Duchess Maria Pavlovna of Russia ranks 216 out of 843. Before her are Edward of Middleham, Prince of Wales, Sigismund, Archduke of Austria, Princess Carolina of Parma, Princess Sophie of Greece and Denmark, Landgravine Elisabeth Amalie of Hesse-Darmstadt, and Antoine, Duke of Montpensier. After her are Alfonso II d'Este, Duke of Ferrara, Archduke John of Austria, Infanta Maria Theresa of Portugal, Duchess Cecilie of Mecklenburg-Schwerin, Princess Juliane of Saxe-Coburg-Saalfeld, and Carlos, Duke of Madrid.