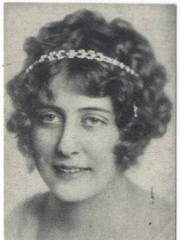 Grace Cunard (born Harriet Mildred Jeffries; April 8, 1893 – January 19, 1967) was an American actress, screenwriter, and film director. During the silent era, she starred in over 100 films, wrote or co-wrote at least 44 of those productions, and directed no fewer than eight of them. In addition, she edited many of her films, including some of the shorts, serials, and features she developed in collaboration with Francis Ford. Read more on Wikipedia

Since 2007, the English Wikipedia page of Grace Cunard has received more than 25,964 page views. Her biography is available in 15 different languages on Wikipedia making her the 4,570th most popular actor.