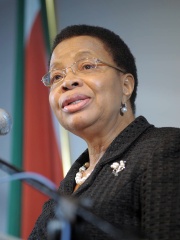 Graça Machel (Portuguese pronunciation: [ˈɡɾasɐ mɐˈʃɛɫ]; née Simbine, pronounced [sĩˈbĩni], born 17 October 1945) is a Mozambican politician and humanitarian. She is the widow of both former presidents of Mozambique and South Africa; Mozambican president Samora Machel and South African president Nelson Mandela. Machel is an international advocate for women's and children's rights and was made an honorary British Dame by Queen Elizabeth II in 1997 for her humanitarian work. Read more on Wikipedia

Since 2007, the English Wikipedia page of Graça Machel has received more than 1,007,158 page views. Her biography is available in 28 different languages on Wikipedia making her the 5,767th most popular politician.

Among politicians, Graça Machel ranks 5,732 out of 14,801. Before her are Philip I, Count of Flanders, Zhu Yujian, Otto II, Margrave of Meissen, Alois Eliáš, 2nd Dalai Lama, and Arbogast. After her are Michel Rocard, Walter Warlimont, Rechiar, Christian August of Holstein-Gottorp, Prince of Eutin, Alfonso Ferrero La Marmora, and Alexandre Deschapelles.