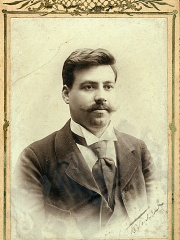 Georgi Nikolov Delchev (Bulgarian/Macedonian: Георги/Ѓорѓи Николов Делчев, 4 February 1872 – 4 May 1903), known as Gotse Delchev or Goce Delčev (Гоце Делчев, originally spelled in older Bulgarian orthography Гоце Дѣлчевъ), was an important Macedonian Bulgarian revolutionary (komitadji), active in the Ottoman ruled Macedonia and Adrianople regions at the turn of the 20th century. He was the most prominent leader of what is known today as Internal Macedonian Revolutionary Organization (IMRO), a secret revolutionary society, active in Ottoman territories in the Balkans, at the end of the 19th and the beginning of the 20th century. Delchev was its representative in Sofia, the capital of Principality of Bulgaria. Read more on Wikipedia

Gotsse Delchev is most famous for his work as a Bulgarian revolutionary. He was a member of the Internal Macedonian Revolutionary Organization (IMRO) and was a prominent figure in the organization's struggle for Macedonian independence.

Among politicians, Gotse Delchev ranks 2,804 out of 15,710. Before him are Emperor Qianshao of Han, Leopold, Prince of Hohenzollern, Senedj, Giuseppe Conte, Haakon III of Norway, and Tancred, King of Sicily. After him are Bülent Ecevit, Ramon Berenguer IV, Count of Barcelona, Richard Neville, 16th Earl of Warwick, Carl Friedrich Goerdeler, Cleitus the Black, and Manolis Glezos.