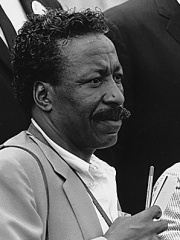 Gordon Roger Alexander Buchanan Parks (November 30, 1912 – March 7, 2006) was an American photographer, musician, writer and film director, who became prominent in U.S. documentary photojournalism in the 1940s through 1970s—particularly in issues of civil rights, poverty and African-Americans—and in glamour photography.As the first famous pioneer among black filmmakers, he was the first African American to produce and direct major motion pictures—developing films relating the experience of slaves and struggling black Americans, and creating the "blaxploitation" genre. He is best remembered for his iconic photos of poor Americans during the 1940s (taken for a federal government project), for his photographic essays for Life magazine, and as the director of the 1971 film Shaft. Read more on Wikipedia

Since 2007, the English Wikipedia page of Gordon Parks has received more than 907,836 page views. His biography is available in 27 different languages on Wikipedia making him the 771st most popular film director.