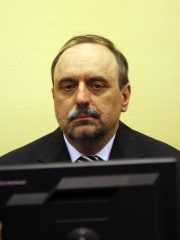 Goran Hadžić (Serbian Cyrillic: Горан Хаџић, pronounced [ɡǒran xǎdʒiːtɕ]; 7 September 1958 – 12 July 2016) was a Croatian Serb nationalist politician of the self-proclaimed Republic of Serbian Krajina, in office during the Croatian War of Independence. He was accused of crimes against humanity and of violation of the laws and customs of war by the International Criminal Tribunal for the former Yugoslavia.Hadžić was indicted on fourteen counts. The charges include criminal involvement in the "deportation or forcible transfer of tens of thousands of Croat and other non-Serb civilians" from Croatian territory between June 1991 and December 1993, including 20,000 from Vukovar; the forced labour of detainees; the "extermination or murder of hundreds of Croat and other non-Serb civilians" in ten Croatian towns and villages including Vukovar; and the "torture, beatings and killings of detainees", including 264 victims seized from Vukovar Hospital.The Tribunal's last remaining fugitive, Hadžić was captured by Serbian authorities on 20 July 2011. Read more on Wikipedia

Since 2007, the English Wikipedia page of Goran Hadžić has received more than 178,407 page views. His biography is available in 32 different languages on Wikipedia making him the 6,812th most popular politician.