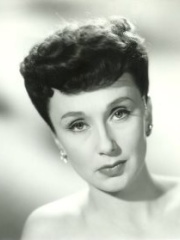 Georgette Lizette Withers, CBE, AO (12 March 1917 – 15 July 2011), known professionally as Googie Withers, was an English entertainer who had a lengthy career in theatre, film, and television. She was a longtime resident of Australia with her husband, the actor and producer John McCallum, with whom she often appeared. Read more on Wikipedia

Since 2007, the English Wikipedia page of Googie Withers has received more than 346,938 page views. Her biography is available in 15 different languages on Wikipedia making her the 7,009th most popular actor.