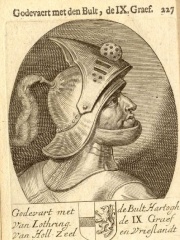 Godfrey IV (died 26 or 27 February 1076), known as the Hunchback, was Duke of Lower Lorraine from 1069 until his death in 1076, succeeding his father Godfrey the Bearded.In the year of his accession, he married Margravine Matilda of Tuscany, daughter of his stepmother Beatrice of Bar, and thus became margrave of Tuscany. Godfrey and Matilda had only one child, Beatrice, who was born in 1071 and died the same year. From 1071 onwards, Godfrey lived apart from his wife. Read more on Wikipedia

Among noblemen, Godfrey IV, Duke of Lower Lorraine ranks 455 out of 842. Before him are Henriette of Cleves, Berthold, Duke of Merania, Friedrich Kettler, Adolf Frederick I, Duke of Mecklenburg, Heinz Brandt, and Maria Letizia Bonaparte, Duchess of Aosta. After him are Prince Lorenz of Belgium, Archduke of Austria-Este, Antoinette de Mérode, Leopoldo de' Medici, Françoise d'Alençon, Amadeus IV, Count of Savoy, and Violante Beatrice of Bavaria.