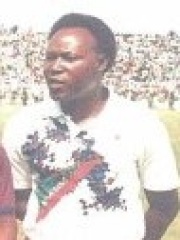 Godfrey Chitalu nicknamed Ucar (22 October 1947 – 27 April 1993) was a Zambian footballer who played as a forward. He is widely regarded as the greatest Zambian player of all time as he holds his national team's goalscoring record and was voted Zambian footballer of the year five times. As well, he was selected by CAF as one of the best 200 African footballers of the past 50 years in 2006.Chitalu scored more than 100 goals in all competitions in 1972, more than Gerd Müller's total in 1972 and Lionel Messi's total in 2012, both of which are often referred to by journalist as "world records". Read more on Wikipedia

Since 2007, the English Wikipedia page of Godfrey Chitalu has received more than 133,194 page views. His biography is available in 17 different languages on Wikipedia making him the 1,484th most popular soccer player.