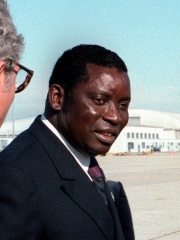 Gnassingbé Eyadéma (French pronunciation: ​[ɲasɛ̃ɡbe ɛjadema]; born Étienne Eyadéma, 26 December 1935 – 5 February 2005) was the President of Togo from 1967 until his death in 2005. He participated in two successful military coups, in January 1963 and January 1967, and became President on 14 April 1967. As President, he created a political party, the Rally of the Togolese People (RPT), and headed an anti-communist single-party regime until the early 1990s, when reforms leading to multiparty elections began. Read more on Wikipedia

Among politicians, Gnassingbé Eyadéma ranks 4,172 out of 15,710. Before him are Princess Margarita of Greece and Denmark, Charles I, Duke of Savoy, Archduke Joseph August of Austria, Eumenes I, Al-Mutawakkil III, and Alexandros Papagos. After him are Eric III of Denmark, Dong Biwu, Piast the Wheelwright, Crocodile, Alexandre Pétion, and Nikolay Shvernik.

Among POLITICIANS In Togo