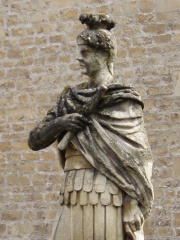 Gnaeus Julius Agricola (; 13 June 40 – 23 August 93) was a Roman Italo-Gallic general responsible for much of the Roman conquest of Britain. Written by his son-in-law Tacitus, the De vita et moribus Iulii Agricolae is the primary source for most of what is known about him, along with detailed archaeological evidence from northern Britain.Agricola began his military career in Britain, serving under governor Gaius Suetonius Paulinus. In his subsequent career, he served in a variety of positions: he was appointed quaestor in Asia province in 64, Plebeian Tribune in 66, and praetor in 68. Read more on Wikipedia

Gnaeus Julius Agricola was a Roman general and politician who was appointed consul in AD 77. He is most famous for his conquest of the Brigantes, the Ordovices, and the Caledonians, and for his occupation of northern Britain.