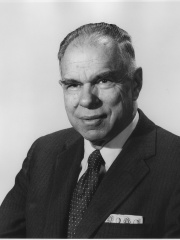 Glenn Theodore Seaborg (; April 19, 1912 – February 25, 1999) was an American chemist whose involvement in the synthesis, discovery and investigation of ten transuranium elements earned him a share of the 1951 Nobel Prize in Chemistry. His work in this area also led to his development of the actinide concept and the arrangement of the actinide series in the periodic table of the elements. Seaborg spent most of his career as an educator and research scientist at the University of California, Berkeley, serving as a professor, and, between 1958 and 1961, as the university's second chancellor. He advised ten US Presidents—from Harry S. Read more on Wikipedia

Since 2007, the English Wikipedia page of Glenn T. Seaborg has received more than 591,542 page views. His biography is available in 59 different languages on Wikipedia making him the 147th most popular chemist.