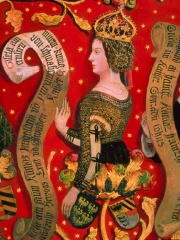 Gisela of Swabia (c. 990 – 15 February 1043), was queen of Germany from 1024 to 1039 and empress of the Holy Roman Empire from 1027 to 1039 by her third marriage with Emperor Conrad II. She was the mother of Emperor Henry III. She was regent of Swabia for her minor son Duke Ernest II of Swabia in 1015, although it seems at that time her husband Conrad was the one who held the reins of government, leading to the enmity between stepfather and stepson.She was an active empress, exemplifying a tradition in which, up to the period of the Hohenstaufens, as the consors regni (ruling partner to the king or emperor), the queen and empress held a substantive role in the government, often intervening in the drafting of documents or even issuing documents in her own name. Read more on Wikipedia

Page views of Gisela of Swabias by language

Among politicians, Gisela of Swabia ranks 4,207 out of 15,577. Before her are Grimoald the Elder, Al-Maqdisi, Andrea Gritti, Marie Angélique de Scorailles, Lenín Moreno, and Tonyukuk. After her are Touman, Ōkubo Toshimichi, Emperor Keitai, Áed mac Cináeda, Artabanus IV of Parthia, and Karl August, Grand Duke of Saxe-Weimar-Eisenach.

Among people born in 990, Gisela of Swabia ranks 8. Before her are Tughril, Conrad II, Holy Roman Emperor, Pope Nicholas II, Sancho III of Pamplona, Bi Sheng, and Mieszko II Lambert. After her are Samuel Aba, Jovan Vladimir, Stefan Vojislav, Hilarion of Kiev, Estrid Svendsdatter, and John Mauropous. Among people deceased in 1043, Gisela of Swabia ranks 2. Before her is George Maniakes. After her are Stefan Vojislav, John the Orphanotrophos, and Alexius of Constantinople.