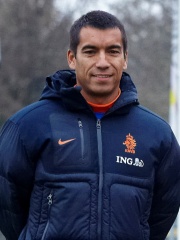 Giovanni Christiaan van Bronckhorst OON (Dutch pronunciation: [ɟijoːˈvɑni vɑm ˈbrɔŋkɦɔrst] (listen); born 5 February 1975), also known by his nickname Gio, is a retired Dutch footballer and currently the manager of Guangzhou R&F. Formerly a midfielder, he moved to left back later in his career.During his club career, Van Bronckhorst played for RKC Waalwijk, Feyenoord, Rangers, Arsenal, Barcelona and again with Feyenoord. He was an instrumental player in Barcelona's 2005–06 UEFA Champions League victory, being in the starting line-up of the final, having played every Champions League match for Barcelona that season.Van Bronckhorst earned 107 caps for the Netherlands national team, and played for his country in three FIFA World Cups, in 1998, 2006 and 2010, as well as three UEFA European Championships, in 2000, 2004 and 2008. After captaining the Oranje in the 2010 World Cup final, he was elected into the Order of Orange-Nassau. Read more on Wikipedia

Since 2007, the English Wikipedia page of Giovanni van Bronckhorst has received more than 1,289,456 page views. His biography is available in 53 different languages on Wikipedia making him the 921st most popular soccer player.