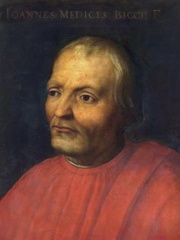 Giovanni di Bicci de' Medici (c. 1360 – February 1429) was an Italian banker and founder of the Medici Bank. While other members of the Medici family, such as Chiarissimo di Giambuono de' Medici, who served in the Signoria of Florence in 1201, and Salvestro de' Medici, who was implicated in the Ciompi Revolt of 1378, are of historical interest, it was Giovanni's founding of the family bank that truly initiated the family's rise to power in Florence. Read more on Wikipedia

Giovanni di Bicci de' Medici is most famous for founding the Medici Bank, which was one of the largest and most successful banks in Europe during the 15th century.

Among noblemen, Giovanni di Bicci de' Medici ranks 114 out of 842. Before him are Pyotr Wrangel, Cleopatra of Macedon, Élisabeth of France, Albert, Duke of Prussia, Princess Margaret of Connaught, and Grand Duchess Olga Alexandrovna of Russia. After him are Felipe VI of Spain, Haakon VI of Norway, Robert Curthose, Joanna of Austria, Princess of Portugal, Mariana of Austria, and Grand Duchess Maria Alexandrovna of Russia.