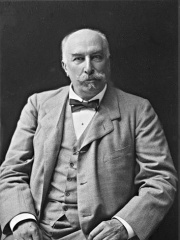 Giovanni Giolitti (Italian pronunciation: [dʒoˈvanni dʒoˈlitti]; 27 October 1842 – 17 July 1928) was an Italian statesman. He was the Prime Minister of Italy five times between 1892 and 1921. He is the second-longest serving Prime Minister in Italian history, after Benito Mussolini. Read more on Wikipedia

Giolitti is most famous for his liberal economic policies, which he implemented during his time as Prime Minister of Italy. He is also known for his support of the Risorgimento, which was a movement for the unification of Italy.

Among politicians, Giovanni Giolitti ranks 4,213 out of 15,710. Before him are L'Inconnue de la Seine, Antiochus XIII Asiaticus, Muhammad of Ghor, Külüg Khan, Ri Chun-hee, and Tassos Papadopoulos. After him are Grand Duchess Maria Nikolaevna of Russia, Henry I of Castile, Ivan Vladislav of Bulgaria, Al-Hakam I, Rudolph II of Burgundy, and Modibo Keïta.