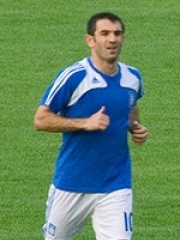 Since 2007, the English Wikipedia page of Giorgos Karagounis has received more than 319,706 page views. His biography is available in 51 different languages on Wikipedia making him the 1,835th most popular soccer player.

Among soccer players, Giorgos Karagounis ranks 1,832 out of 13,233. Before him are Ljubiša Stevanović, Óscar Cardozo, Yuji Kishioku, Mario Corso, Emre Can, and Rubén Galván. After him are Thorgan Hazard, Osvaldo Fattori, George Robledo, Santiago Vernazza, Daishiro Yoshimura, and Luc Nilis.