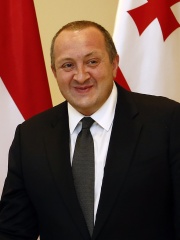 Giorgi Margvelashvili (Georgian: გიორგი მარგველაშვილი; born 4 September 1969) is a Georgian academic and politician who was the fourth President of Georgia, in office from 17 November 2013 to 16 December 2018. A philosopher by education, he was twice the rector of the Georgian Institute of Public Affairs from 2000 to 2006 and again from 2010 to 2012. In October 2012, he became a member of the newly formed cabinet of Bidzina Ivanishvili as Minister of Education and Science of Georgia. Read more on Wikipedia

Since 2007, the English Wikipedia page of Giorgi Margvelashvili has received more than 757,368 page views. His biography is available in 57 different languages on Wikipedia making him the 9,038th most popular politician.