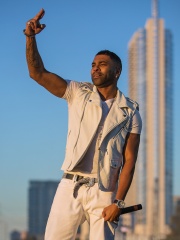 Elgin Baylor Lumpkin (born October 15, 1970), better known by his stage name Ginuwine, is an American R&B singer, songwriter, dancer, and actor. He began his career as a member of Swing Mob in the early 1990s. Signing to Epic Records as a solo artist in the mid-1990s, Ginuwine has released a number of multi-platinum and platinum-selling albums and singles, becoming one of R&B's top artists during the late 1990s and early 2000s. Read more on Wikipedia

Page views of Ginuwines by language

Among singers, Ginuwine ranks 3,063 out of 3,541. Before him are May J., David Archuleta, Jhené Aiko, Laura Rizzotto, Bertine Zetlitz, and Petr Elfimov. After him are Lupe Fiasco, Anjeza Shahini, Hovig Demirjian, Anna von Hausswolff, Anthony Hamilton, and Nathan Trent.