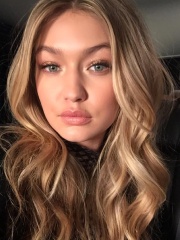 Jelena Noura Hadid (born April 23, 1995), known professionally as Gigi Hadid, is an American model. In November 2014, Hadid made her debut in the Top 50 Models ranking at Models.com. In 2016, she was named International Model of the Year by the British Fashion Council. Read more on Wikipedia

Buzzfeed
Zayn Malik And Gigi Hadid Just Revealed Their Daughter's Name And The Touching Meaning Behind It
So many meanings rolled into one perfect name...View Entire Post ›
[{"@type":"Person","name":"Syd Robinson","url":"https://www.buzzfeed.com/sydrobinson1","jobTitle":"BuzzFeed Staff"}]
TMZ
Gigi Hadid Reveals Daughter's Name is Khai
The wait is finally over, Gigi Hadid has revealed the name of her daughter with Zayn Malik ... Khai. Gigi made the not-so-subtle announcement Thursday, updating her Instagram page bio to include "Khai's mom." Fans were quick to notice the change,…
TMZ Staff
The Indian Express
Gigi Hadid reveals daughter’s name on Instagram
The four-month-old's name may be a tribute to Hadid's Palestinian grandmother
Lifestyle Desk
Upstract.com
Gigi Hadid reveals name of baby daughter
She shares the baby with her boyfriend Zayn Malik.
editors

Among MODELS In United States