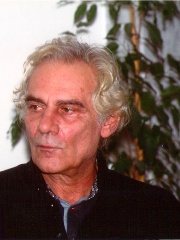 Gian Maria Volonté (9 April 1933 – 6 December 1994) was an Italian actor, remembered for his versatility as an interpreter, his outspoken left-wing leanings and fiery temper on and off-screen. He is perhaps most famous outside Italy for his roles in four Spaghetti Western films: Ramón Rojo and El Indio in Sergio Leone's A Fistful of Dollars (1964) and For a Few Dollars More (1965), El Chuncho Munoz in Damiano Damiani's A Bullet for the General (1966) and Professor Brad Fletcher in Sergio Sollima's Face to Face (1967). In Italy and much of Europe, he was notable for his roles in high-profile social dramas depicting the political and social stirrings of Italian and European society in the 1960s and 1970s, including four films directed by Elio Petri – We Still Kill the Old Way (1967), Investigation of a Citizen Above Suspicion (1970), The Working Class Goes to Heaven (1971) and Todo modo (1976). Read more on Wikipedia

Gian Maria Volonté is most famous for his role as the antagonist in the film Once Upon a Time in America.