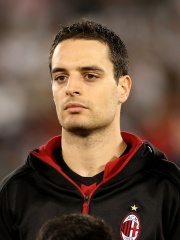 Giacomo "Jack" Bonaventura (Italian pronunciation: [ˈdʒaːkomo ˈdʒɛk ˌbɔnavenˈtuːra]; born 22 August 1989) is an Italian professional footballer who plays as a midfielder, most recently for Serie A club Milan, and the Italy national football team. Bonaventura started his senior career at Atalanta in the Serie A in 2007, his impressive performances earning him a €7 million transfer to Milan in 2014, spending 6 seasons at the club, before leaving in 2020. Bonaventura has been a youth national team member since 2008. Read more on Wikipedia

Since 2007, the English Wikipedia page of Giacomo Bonaventura has received more than 639,670 page views. His biography is available in 34 different languages on Wikipedia making him the 3,634th most popular soccer player.