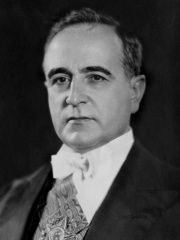 Getúlio Dornelles "Gegè" Vargas (Portuguese: [ʒeˈtulju doɾˈnɛlis ˈvaɾɡɐs]; 19 April 1882 – 24 August 1954), also known by his initials GV and nicknamed "the Father of the Poor", was a Brazilian lawyer, politician, and dictator who served as the 14th and 17th president of Brazil. He was born in São Borja, Rio Grande do Sul to a powerful family, embarking on a quick military career before graduating from law school. His political career began with district attorney, soon becoming a state deputy prior to a short interim period. Read more on Wikipedia

Among politicians, Getúlio Vargas ranks 1,573 out of 15,710. Before him are Bill de Blasio, Olof Skötkonung, Uesugi Kenshin, Albert Lebrun, Amr ibn Hishām, and John II of Aragon. After him are Elizabeth of Portugal, Edward, King of Portugal, Ahmad Shah Massoud, Viktor Orbán, Emeric, King of Hungary, and Maximilian II Emanuel, Elector of Bavaria.