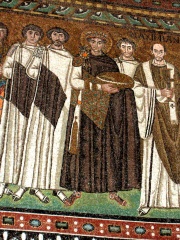 Germanus (Greek: Γερμανός; died 550) was an East Roman (Byzantine) general, one of the leading commanders of Emperor Justinian I (r. 527–565). Germanus was Emperor Justinian's cousin, and a member of the ruling dynasty. Read more on Wikipedia

Since 2007, the English Wikipedia page of Germanus has received more than 29,393 page views. His biography is available in 17 different languages on Wikipedia. Germanus is the 1,009th most popular military personnel (down from 966th in 2019).

Page views of Germanuses by language