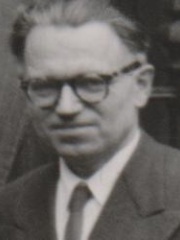 Gerhard Heinrich Friedrich Otto Julius Herzberg, (German: [ˈɡeːɐ̯.haʁt ˈhɛʁt͡sˌbɛʁk] (listen); December 25, 1904 – March 3, 1999) was a German-Canadian pioneering physicist and physical chemist, who won the Nobel Prize for Chemistry in 1971, "for his contributions to the knowledge of electronic structure and geometry of molecules, particularly free radicals". Herzberg's main work concerned atomic and molecular spectroscopy. He is well known for using these techniques that determine the structures of diatomic and polyatomic molecules, including free radicals which are difficult to investigate in any other way, and for the chemical analysis of astronomical objects. Read more on Wikipedia

Since 2007, the English Wikipedia page of Gerhard Herzberg has received more than 95,794 page views. His biography is available in 48 different languages on Wikipedia making him the 127th most popular chemist.