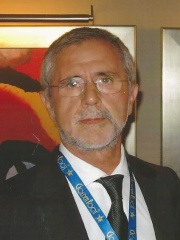 Gerhard "Gerd" Müller (German pronunciation: [ˈɡɛɐ̯t ˈmʏlɐ]; born 3 November 1945) is a German former professional footballer. A prolific striker renowned for his clinical finishing, especially in and around the six-yard box, he is widely regarded as one of the greatest goalscorers in the history of the sport.At international level with West Germany, he scored 68 goals in 62 appearances, and at club level, after 15 years with Bayern Munich, he scored a record 365 goals in 427 Bundesliga games and an international record 66 goals in 74 European club games. Averaging over a goal a game with West Germany, Müller is now 19th on the list of all time international goalscorers, despite playing fewer matches than every other player in the top 48. Read more on Wikipedia

Gerd Müller is most famous for being the all-time leading goalscorer for the German national team. He scored 68 goals in 62 games for his country.