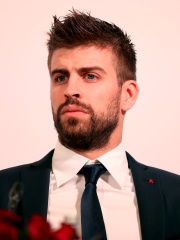 Gerard Piqué Bernabeu (Catalan: [ʒəˈɾaɾt piˈke βəɾnəˈβew], Spanish: [ɟʝeˈɾaɾ piˈke βeɾnaˈβew]; born 2 February 1987) is a Spanish professional footballer who plays as a centre-back for Barcelona. Originally one of the most promising students at La Masia, Piqué joined the Manchester United academy in 2004, where he remained for four years, in which he had some trouble adjusting to the Premier League football style. He returned to Barcelona in 2008 under Pep Guardiola's leadership and helped the club win trebles in 2008–09 and 2014–15. Read more on Wikipedia

Since 2007, the English Wikipedia page of Gerard Piqué has received more than 10,139,968 page views. His biography is available in 76 different languages on Wikipedia making him the 277th most popular soccer player.