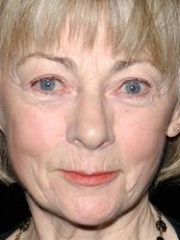 Geraldine McEwan (born Geraldine McKeown; 9 May 1932 – 30 January 2015) was an English actress, who had a long career in film, theatre and television. Michael Coveney described her, in a tribute article, as "a great comic stylist, with a syrupy, seductive voice and a forthright, sparkling manner".McEwan was a five-time Olivier Award nominee, and twice won the Evening Standard Award for Best Actress; for The Rivals (1983) and The Way of the World (1995). She was also nominated for the 1998 Tony Award for Best Actress in a Play for The Chairs. Read more on Wikipedia

Since 2007, the English Wikipedia page of Geraldine McEwan has received more than 1,173,781 page views. Her biography is available in 20 different languages on Wikipedia making her the 1,619th most popular actor.

Among actors, Geraldine McEwan ranks 1,599 out of 8,832. Before her are Bella Darvi, David Soul, Lea Thompson, Mary-Louise Parker, Anita Björk, and Melissa McBride. After her are Jeff Daniels, Massimo Troisi, Annabella, Will Ferrell, Mila Kunis, and Amanda Seyfried.