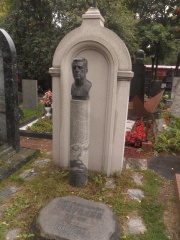 Georgy Vasilyevich Sviridov (Russian: Гео́ргий Васи́льевич Свири́дов; his patronymic is also transliterated Vasil'yevich, Vasilievich, and Vasil'evich; 16 December 1915 – 6 January 1998) was a Soviet and Russian neoromantic composer. He is most widely known for his choral music, strongly influenced by the traditional chant of the Russian Orthodox Church, as well as his orchestral works which often celebrate elements of Russian culture. Sviridov employed, in his choral music especially, rich and dense harmonic textures, embracing a romantic-era tonality; his works would come to incorporate not only sacred elements of Russian church music, including vocal work for the basso profundo, but also the influence of Eastern European folk music, 19th-century European romantic composers (especially Tchaikovsky), and neoromantic contemporaries outside of Russia. Read more on Wikipedia

Among COMPOSERS In Russia