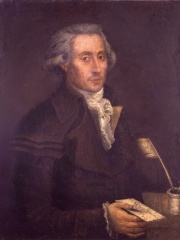 Georges Auguste Couthon (22 December 1755 – 28 July 1794) was a French politician and lawyer known for his service as a deputy in the Legislative Assembly during the French Revolution. Couthon was elected to the Committee of Public Safety on 30 May 1793 and served as a close associate of Maximilien Robespierre and Louis Antoine de Saint-Just until his arrest and execution in 1794 during the period of the Reign of Terror. Read more on Wikipedia

Since 2007, the English Wikipedia page of Georges Couthon has received more than 104,230 page views. His biography is available in 24 different languages on Wikipedia making him the 2,393rd most popular politician.

Among politicians, Georges Couthon ranks 2,377 out of 14,801. Before him are Magnus I of Sweden, Carlo Azeglio Ciampi, John of Saxony, Eugène Edine Pottier, Sher Shah Suri, and Burebista. After him are Emperor Kōshō, Ferdinando II de' Medici, Grand Duke of Tuscany, Smendes, Chlodwig, Prince of Hohenlohe-Schillingsfürst, Ammar ibn Yasir, and Sancho II of Portugal.