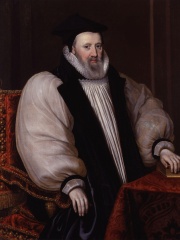 George Abbot (29 October 1562 – 4 August 1633) was an English divine who was Archbishop of Canterbury from 1611 to 1633. He also served as the fourth Chancellor of Trinity College, Dublin, from 1612 to 1633.Chambers Biographical Dictionary describes him as "[a] sincere but narrow-minded Calvinist". Among his five brothers, Robert became Bishop of Salisbury and Maurice became Lord Mayor of London. Read more on Wikipedia

Among religious figures, George Abbot ranks 2,108 out of 2,272. Before her are Pope Peter II of Alexandria, Filoimea Telito, Telesphore Toppo, Bruce M. Metzger, J. I. Packer, and Pope Kedron of Alexandria. After her are Dolly Pentreath, Konrad Krajewski, Matteo Zuppi, Braulio Rodríguez Plaza, Saud Al-Shuraim, and Symeon of Durham.