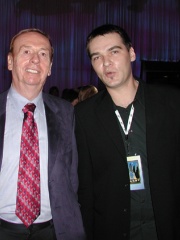 Geoffrey Ernest Emerick (5 December 1945 – 2 October 2018) was an English sound engineer and record producer who worked with the Beatles on their albums Revolver (1966), Sgt. Pepper's Lonely Hearts Club Band (1967) and Abbey Road (1969). Beatles producer George Martin credited him with bringing "a new kind of mind to the recordings, always suggesting sonic ideas, different kinds of reverb, what we could do with the voices".Emerick also engineered the Zombies' Odessey and Oracle (1968), Paul McCartney and Wings' Band on the Run (1973) and Elvis Costello's Imperial Bedroom (1982), among many others. Read more on Wikipedia

Since 2007, the English Wikipedia page of Geoff Emerick has received more than 343,312 page views. His biography is available in 23 different languages on Wikipedia making him the 972nd most popular musician.

Among musicians, Geoff Emerick ranks 975 out of 2,258. Before him are Tyler, the Creator, Gary Peacock, Vinnie Colaiuta, Pixinguinha, Clark Terry, and Michael Weikath. After him are Ludacris, Larry Carlton, Tomasz Stańko, James Kottak, Zoltán Kocsis, and Joseph Böhm.