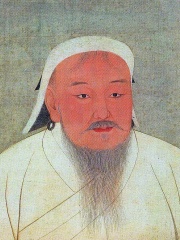 Genghis Khan (born Temüjin; c. 1162 – August 25, 1227) was the founder and first Great Khan (Emperor) of the Mongol Empire, which became the largest contiguous empire in history after his death. He came to power by uniting many of the nomadic tribes of the Mongol steppe and being proclaimed the universal ruler of the Mongols, or Genghis Khan. With the tribes of Northeast Asia largely under his control, he set in motion the Mongol invasions, which ultimately witnessed the conquest of much of Eurasia, and incursions by Mongol raiding parties as far west as Legnica in western Poland and as far south as Gaza. Read more on Wikipedia

Genghis Khan is most famous for being the founder of the Mongol Empire. He is also known for his military prowess and his conquests.

Among people born in 1162, Genghis Khan ranks 1. After him are Jamukha, Eleanor of England, Queen of Castile, Abd al-Latif al-Baghdadi, Theodoric I, Margrave of Meissen, and Fujiwara no Teika. Among people deceased in 1227, Genghis Khan ranks 1. After him are Jochi, Pope Honorius III, Leszek the White, Louis IV, Landgrave of Thuringia, Qiu Chuji, Henry V, Count Palatine of the Rhine, Abdallah al-Adil, Al-Mu'azzam Isa, Marco I Sanudo, Renaud I, Count of Dammartin, and Demetrius of Montferrat.