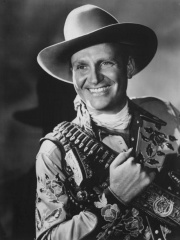 Orvon Grover "Gene" Autry (September 29, 1907 – October 2, 1998), nicknamed The Singing Cowboy, was an American singer, songwriter, actor, musician and rodeo performer who gained fame largely by singing in a crooning style on radio, in films, and on television for more than three decades beginning in the early 1930s. Autry was the owner of a television station, several radio stations in Southern California, and the Los Angeles/California/Anaheim Angels Major League Baseball team from 1961 to 1997. From 1934 to 1953, Autry appeared in 93 films, and between 1950 and 1956 hosted The Gene Autry Show television series. Read more on Wikipedia

Since 2007, the English Wikipedia page of Gene Autry has received more than 1,647,991 page views. His biography is available in 31 different languages on Wikipedia making him the 752nd most popular musician.