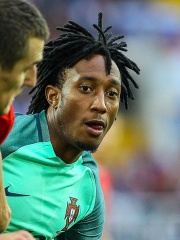 Gelson Dany Batalha Martins (Portuguese pronunciation: [ˈʒɛlsɐ̃ mɐɾˈtĩʃ]; born 11 May 1995) is a Portuguese professional footballer who plays as a winger for Ligue 1 club Monaco and the Portugal national team. He started his career at Sporting, appearing in 125 competitive matches and winning two trophies during his three-year tenure. Read more on Wikipedia

Since 2007, the English Wikipedia page of Gelson Martins has received more than 849,237 page views. His biography is available in 31 different languages on Wikipedia making him the 4,065th most popular soccer player.